I went to paint at Hakone Gardens with a friend. Suhita and I spent some time catching up, drawing, and playing with some new sketching toys. One of them is a brass nib from Kakimori (I thought it is just an obtuse nail when I first saw some images - but now I know that it is hollow inside and has some grooves on the sides as well. You can see this nib and how it compares to other tools in this video. As a result, it has a very varied width of the marks that can be made with it and a liberating time without re-dipping into an inkpot. Between trying a new nib, then playing with some shimmering inks, and other pens and pencils, it was a day to experiment!

So after I finished a sketch, I took a picture and then added water over it. And I am not sure it worked as I hoped - but it might be due to the astringent blue color that resulted from adding water. See both images and let me know which one works from your point of view. 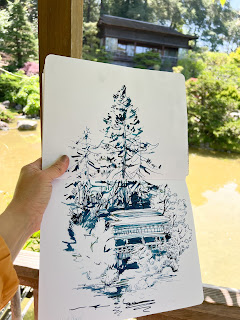 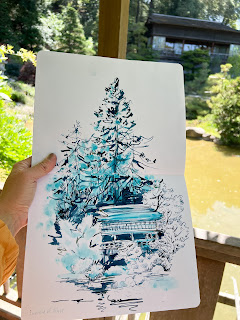 And here is another mixed media piece from the same outing - it is impossible to see the shimmering ink but you can see how it changes color as I kept drawing. 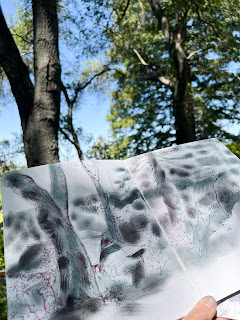