Drawn reports in the form of the portraits - war in Ukraine. September 27-October 1, 2022

September 27, 2022. Day 215 of war.
We talk about how some language nuances and expressions are lost now due to the changes in technology and how we use it. Mom brings us some examples with the phones and computers and some mishaps that happen to her. She says: "it is not bad or good. It just is." And in the simplicity of that expression, there is so much about her that am starting to laugh without apparent reason. Dad reports that Mom's cat doesn't purr for him - only for Mom. We go over news from all the friends and relatives and note that this year many important dates were missed or greetings were sent late. Such a hard year. 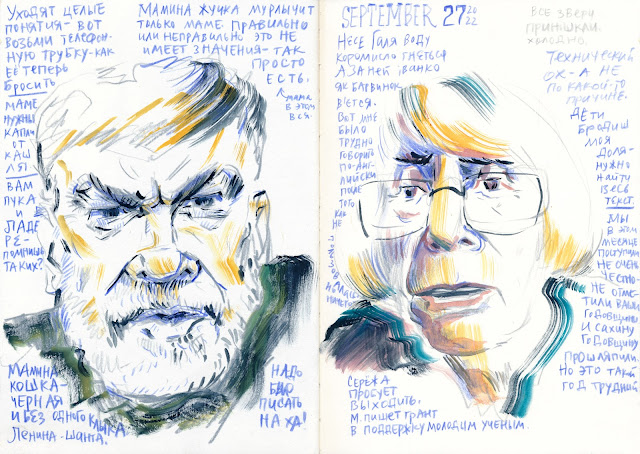 September 29, 2022. Day 217 of war.
My parents are reporting that the weather is good and will be even better - old wives' summer is in Ukraine. We do not discuss the idiocy of phony referendums but are going over the list of the friends and family members. Conversation turns to the old Singer sewing machine that belonged to my great-grandma. We laugh when we get confused by who calls what century previous. Dad tells me that he removed all his attempts to make it electric and brought back to the "original state" and that I can "finally" have it. He is trying to convince himself that tea will help him as much as painkillers and tells stories about all kinds of Nobel laureates to stop me from expressing my opinion on the subject. As it is a custom for us - I show them what I drew, and they give me their opinions. This time Dad says that he looks like "grandpa Borya" in my drawing, and this sends us into a conversation about another relative who is unknown to me. 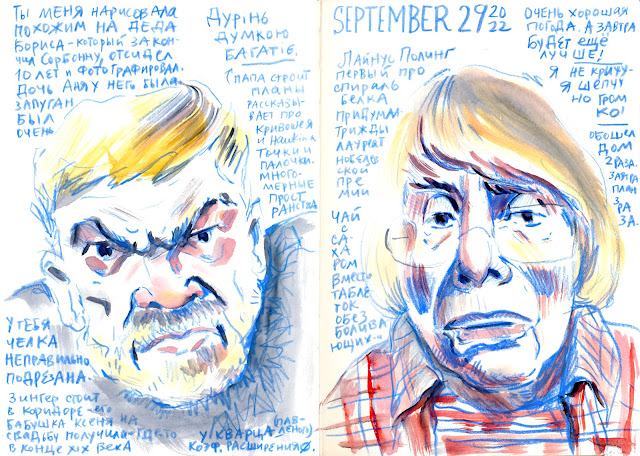 October 1, 2022. Day 220 of war.
A conversation about bicycles with Dad and fat cells with Mom. Somehow fat cells lead us to Archimed and Anacondas - I lost the transition but it had something to do with the concept of dieting and the fact that fat cells cannot disappear. In our conversations Mom sometimes adds some things to the memoirs that she is writing. On this day she told me about an old biology station on the river near Kharkiv and how she saw the whole life cycle of the polyphemus moth there during one summer holiday. How beautiful all the stages were and how some moths were considered abnormal. They were the prettiest. We talk about our summer vacation on river Vorskla many many years ago and how we were picking raspberries. 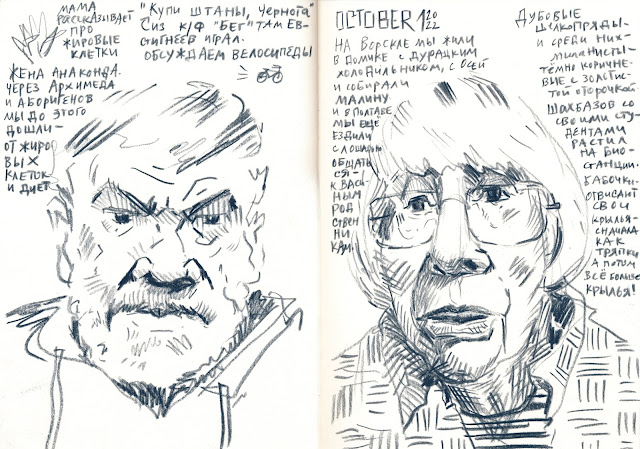