March 4, 2022Day 9 since Russia invaded Ukraine. Today’s conversation with my parents. (they are in Kharkiv, Ukraine). Volunteers brought them food today! 3 apples, some potatoes, 10 carrots, a few onions, boxes with prepared sausages with some porridge, pack of milk. The bombing continued all day and into the night. I heard loud explosions many times during our conversation. Beautiful snow fell overnight in Kharkiv. The garbage truck came and their neighbor helped them take out the garbage to the bin. Thank you to the people who organized food for my parents! This help is priceless - but I am working on getting you support from me personally and if possible, from others. Please continue helping people in Kharkiv. Thank you to the city workers for trying to keep it running under the non-stop shelling. Thank you to all who defend Ukraine, all who stand with it against a dictator and murderer Putin. And against the people who believe in his lies.

March 5, 2022
Today’s conversation with my parents. (they are in Kharkiv, Ukraine). Many people call them throughout the day. We found a place that might have dad’s meds and waiting for a reply. We discuss Ukrainian anthem which is optimistic but is told from a tragic place. There was a sighting of a squirrel in their yard. Birds are very scared of air raids. Snow is beautiful - they take pictures for me as they know I miss snow. 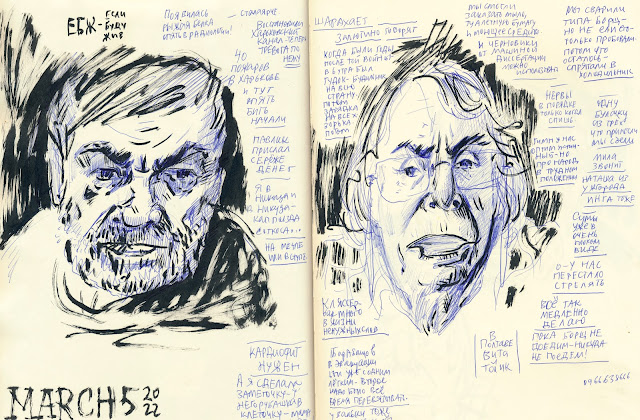 March 6, 2022
Today I drew my parents twice during our video call. (they are in Kharkiv, Ukraine). There was no internet connection for part of the day and the landline was not working so spirits were low. But then we got lucky and both were restored! Neighbor is leaving and brought them more food. Snow is melting but freezing temperatures are expected during the week. Heating still works - the city services should get medals. Mom does not know how to curse but she wants to - so she tries to find an animal that she would use to curse the people who bomb the city. Alas - she finds something nice to say about each animal she tries, but not about the people who bring war. 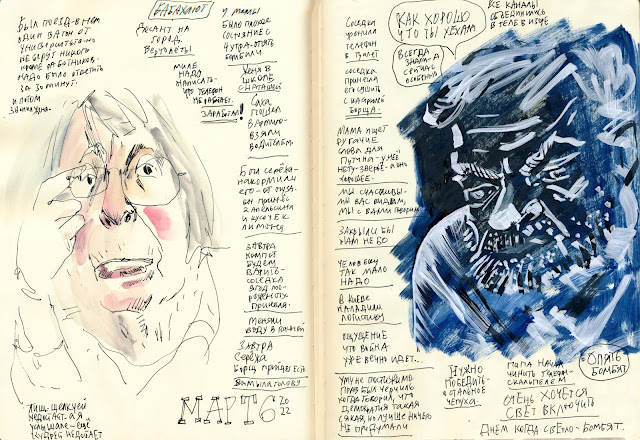 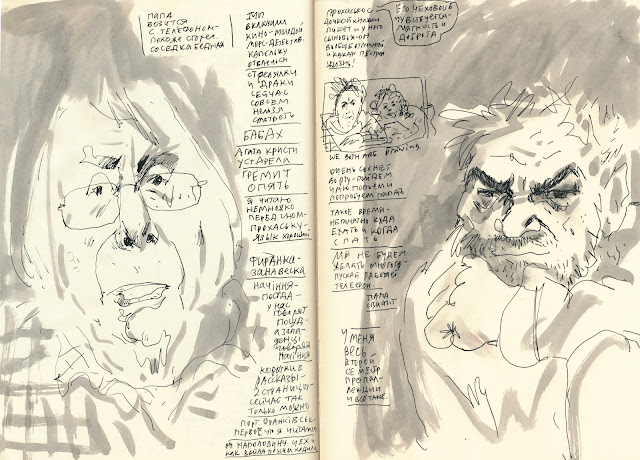