The topic of art and war in general and art and war in Ukraine in particular is something I think about often. And since a lot of that thinking is prompted by some interesting examples I thought that I will collect them here for me to go back to and to share them too.
I will start with two examples of street art.
The most recent one received a lot of light in the press lately - Banksy confirmed seven murals that they created in Ukraine. This is a screenshot of the article with my favorite of the murals - an elderly gentleman taking a bath despite the war raging around. You can see many of the murals at the link to the full article below: 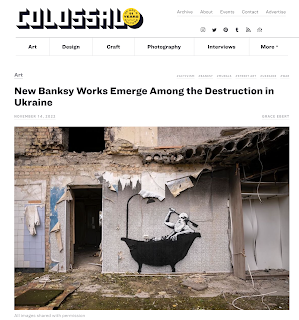 https://www.thisiscolossal.com/2022/11/banksy-works-ukraine/
For me the power of these images comes from their  locations - they are painted on the buildings ruined by war or include a war attribute (two kids riding an anti-tank obstacle defense - see the article above). And I think that this particular image is unique in the line of wall graffiti that Banksy created over the years. And I am just plain grateful for the support. And the joke of a little kid throwing down a big martial arts figure. Aga in - see images in the article above.
There is a rich culture of murals in Ukraine and Kharkiv has a wide range of street art by various artists. I've visited some during my visits but not all (and saw way more than this site shows).
But one artist (from Kharkiv) has a legendary status among street graffiti artists - Hamlet Zinkovskyi (known as Gamlet). His work has important text elements that make it even more interesting for people who can read it - but less accessible on the world stage. However, I am a big fan of including text with images and enjoyed finding his little gift sprinkled in the city center a lot. Here is one of the war-time examples: The text says: "your blood can fight in the war too. donate."
Screenshotted image from this link: https://www.instagram.com/p/ChaUhthj3iI/ 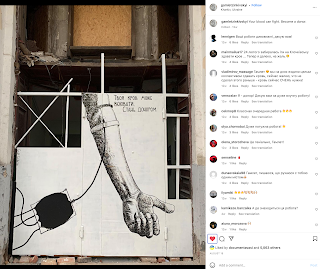 In Hamlet's instagram account you will see many works created after February 2022 and with the war, he, like many other russian-speaking Ukrainians switched to the Ukrainian language and continues to work in Kharkiv and is quite prolific.
The text below says: "the keys are missing their doors" 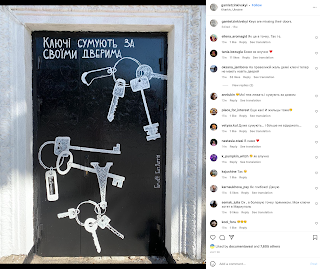